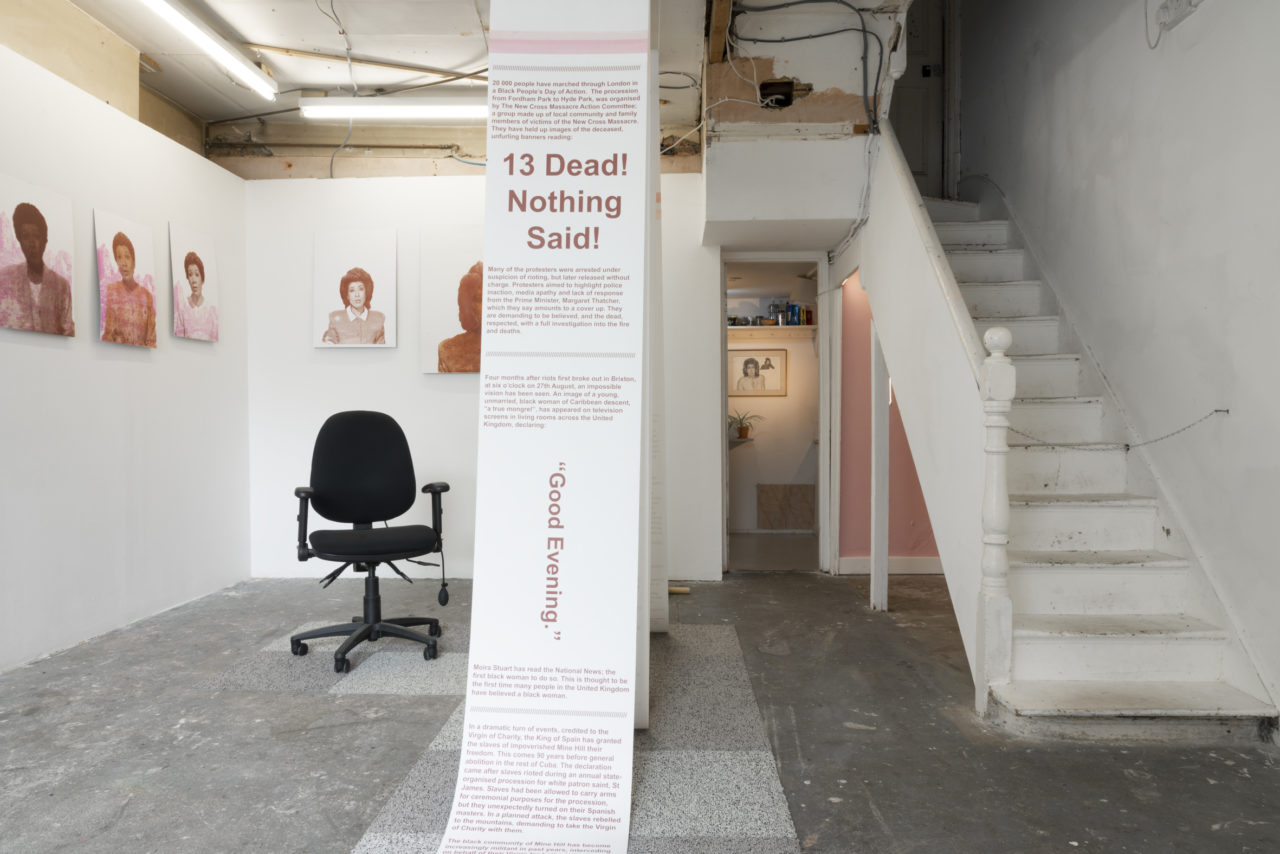 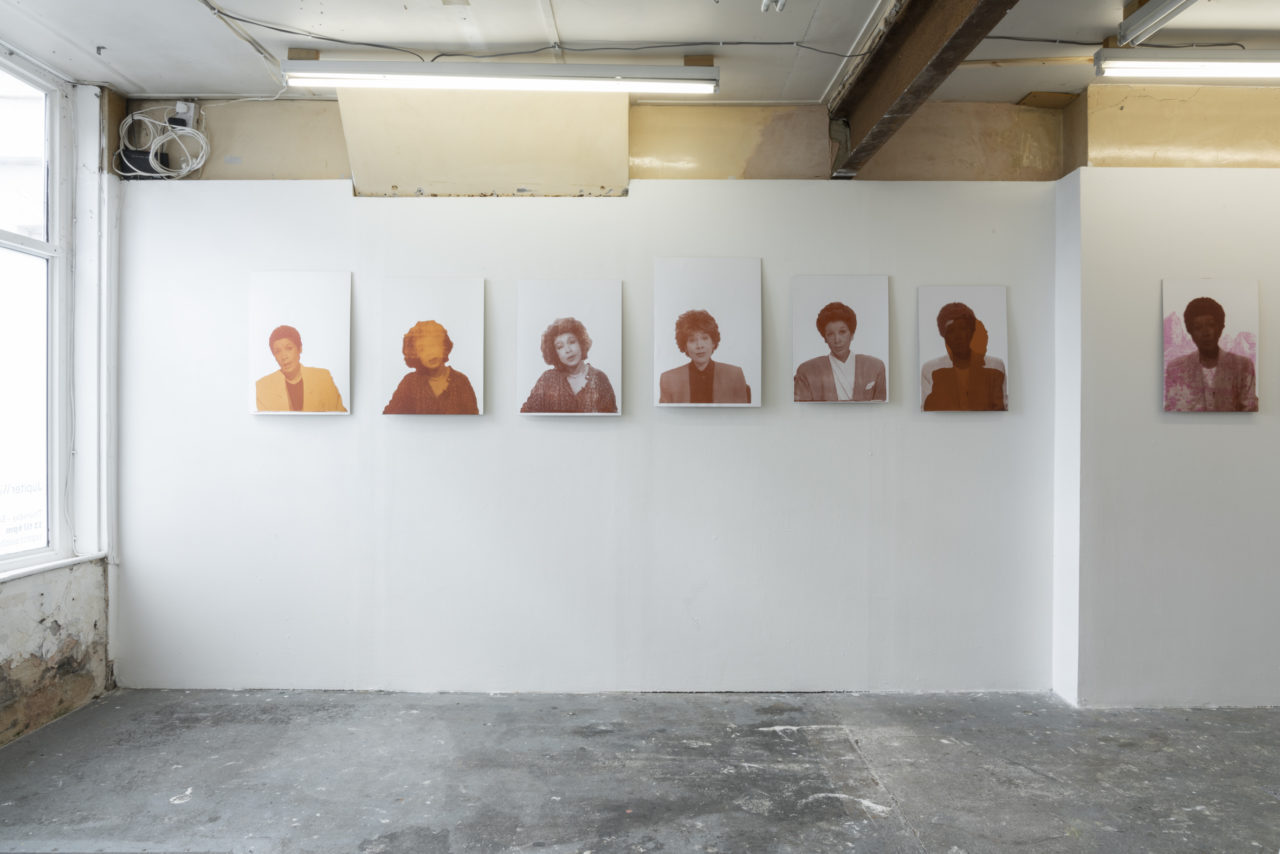 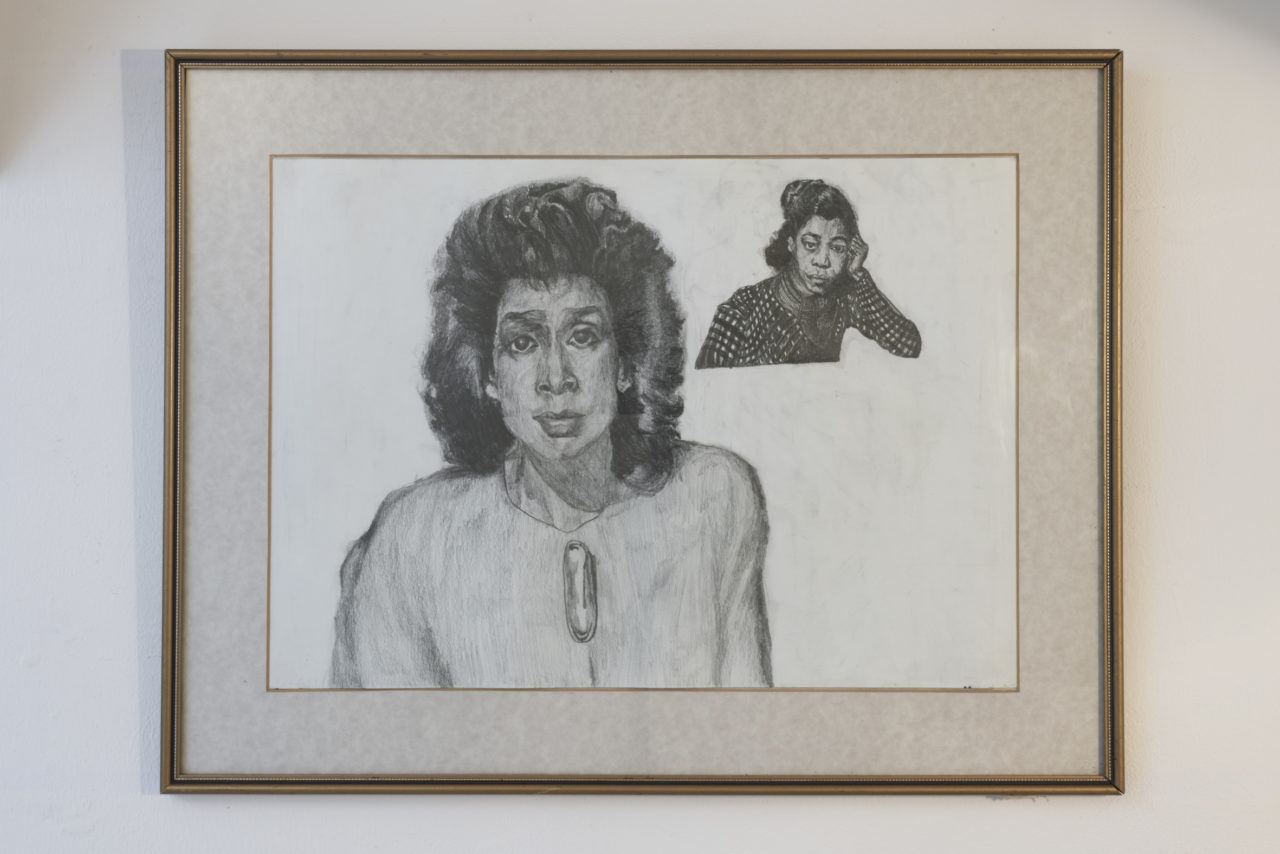 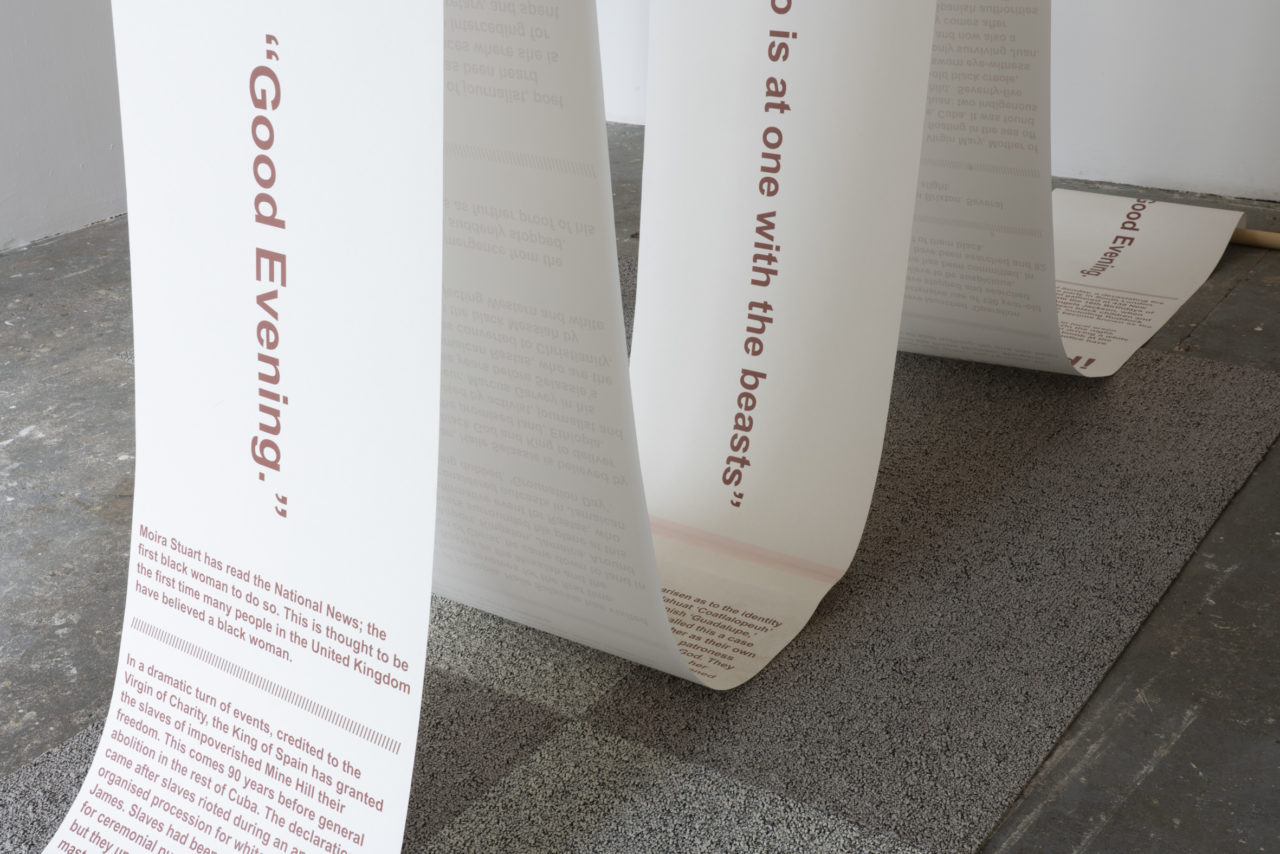 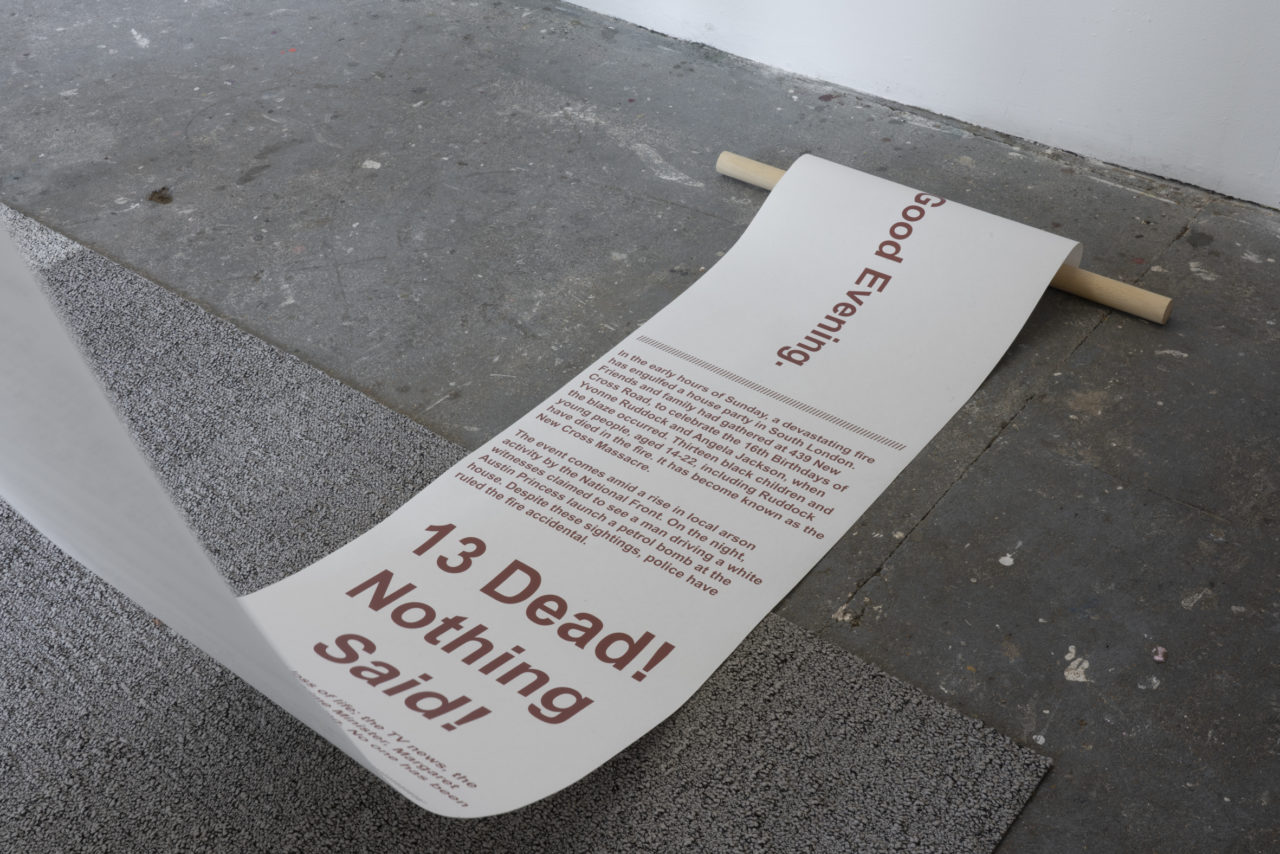 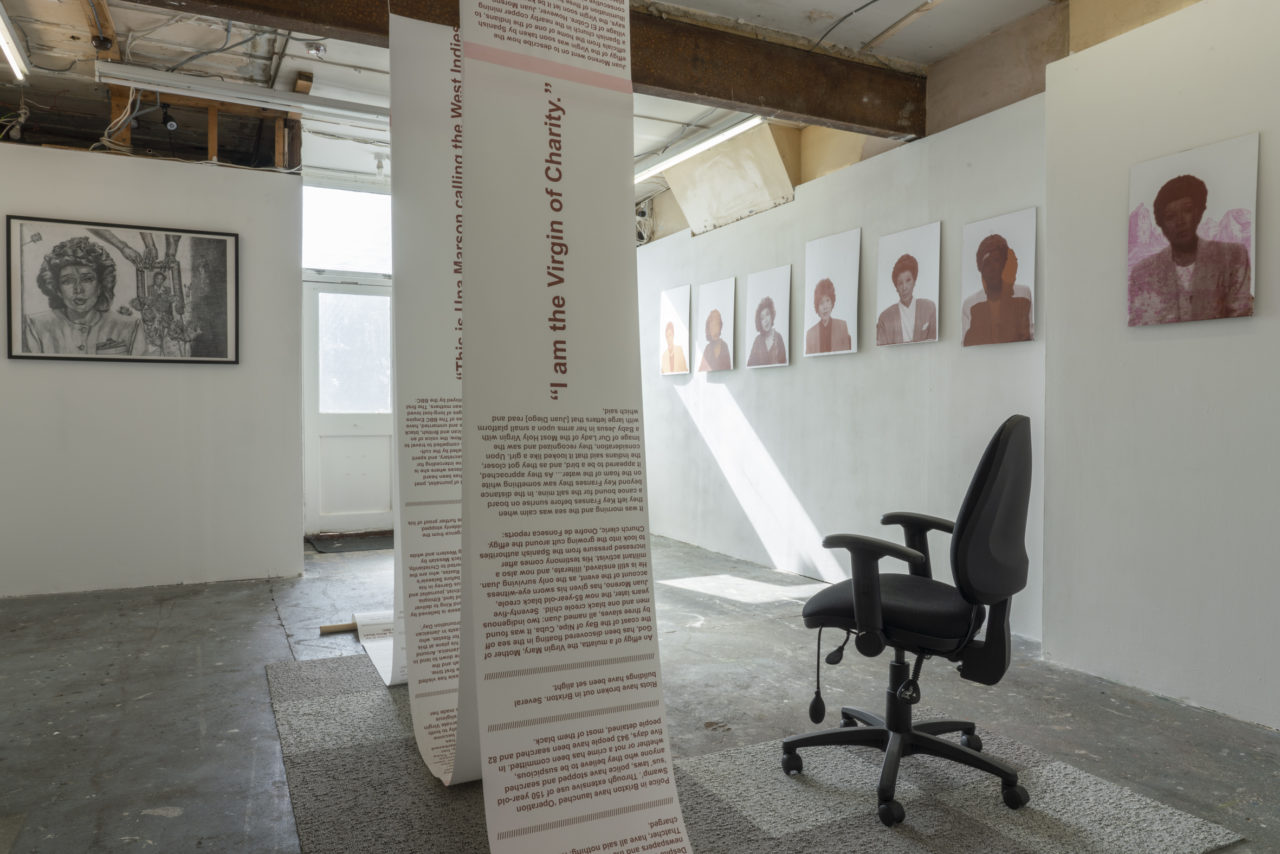 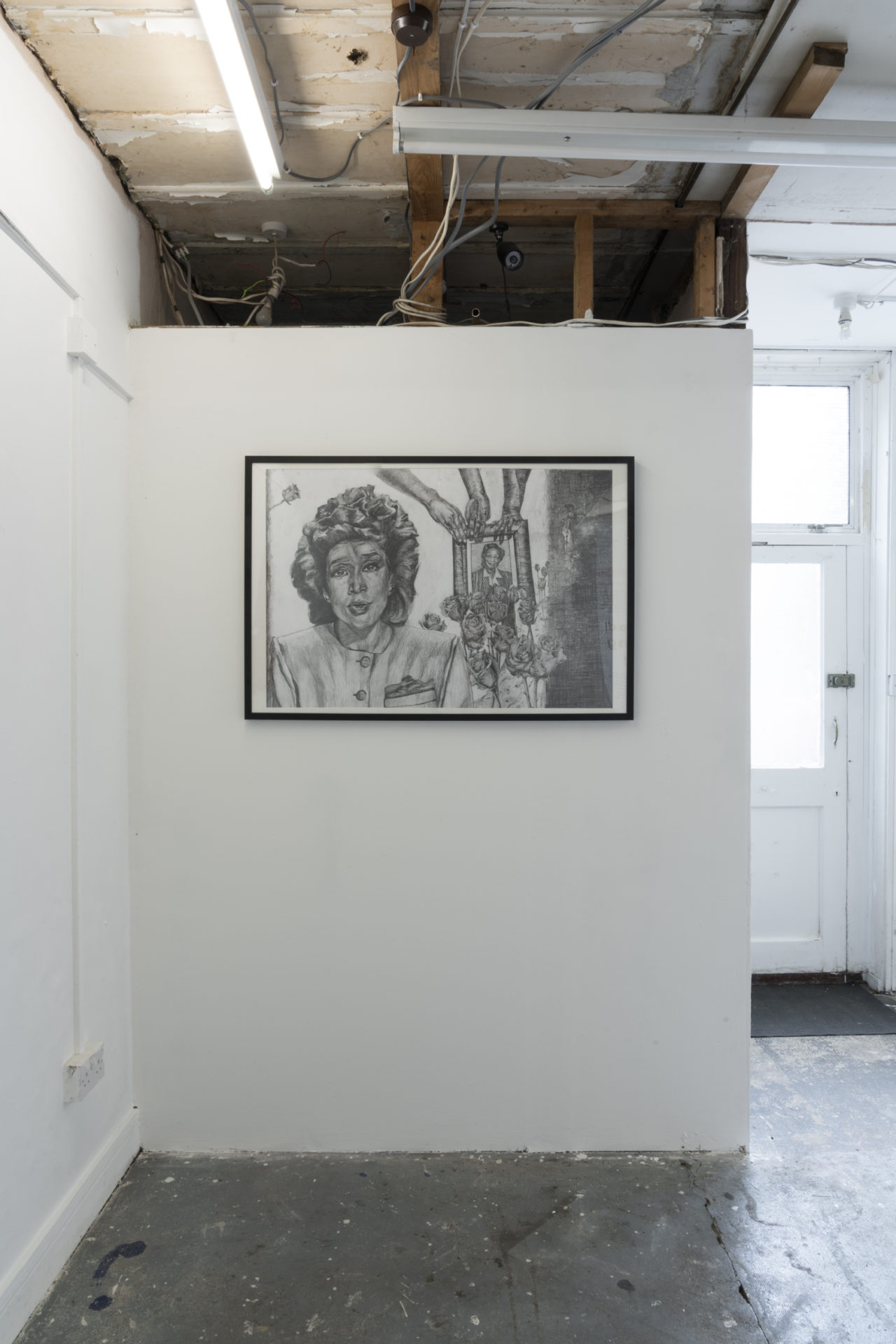 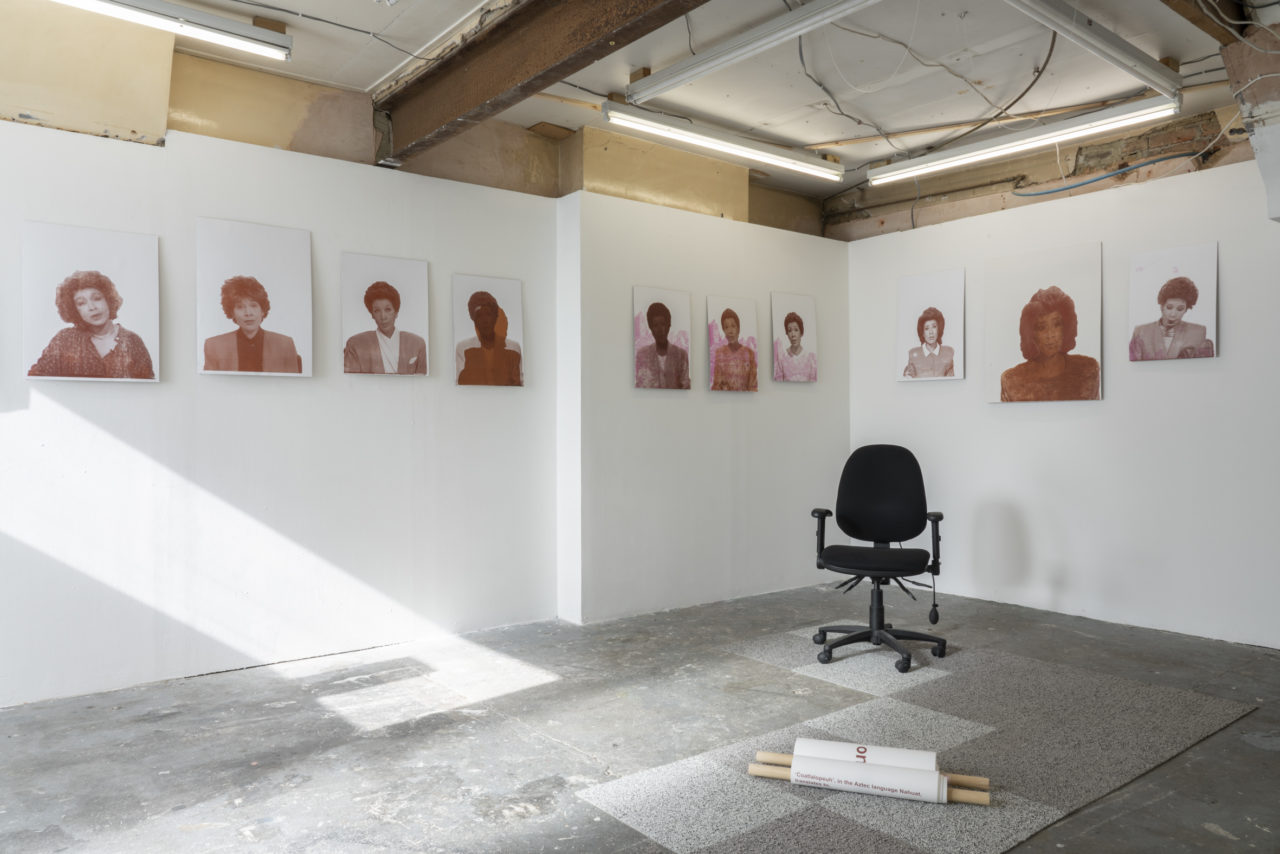 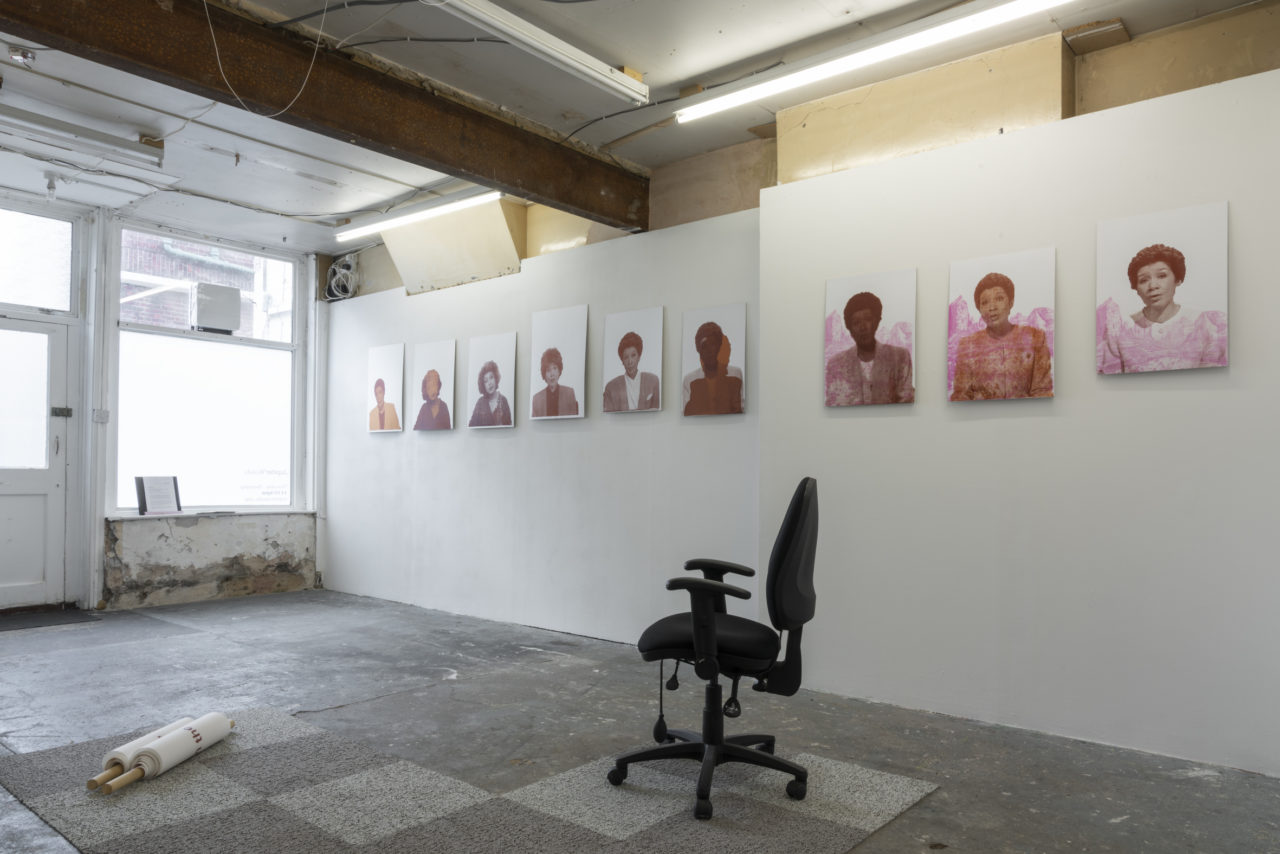 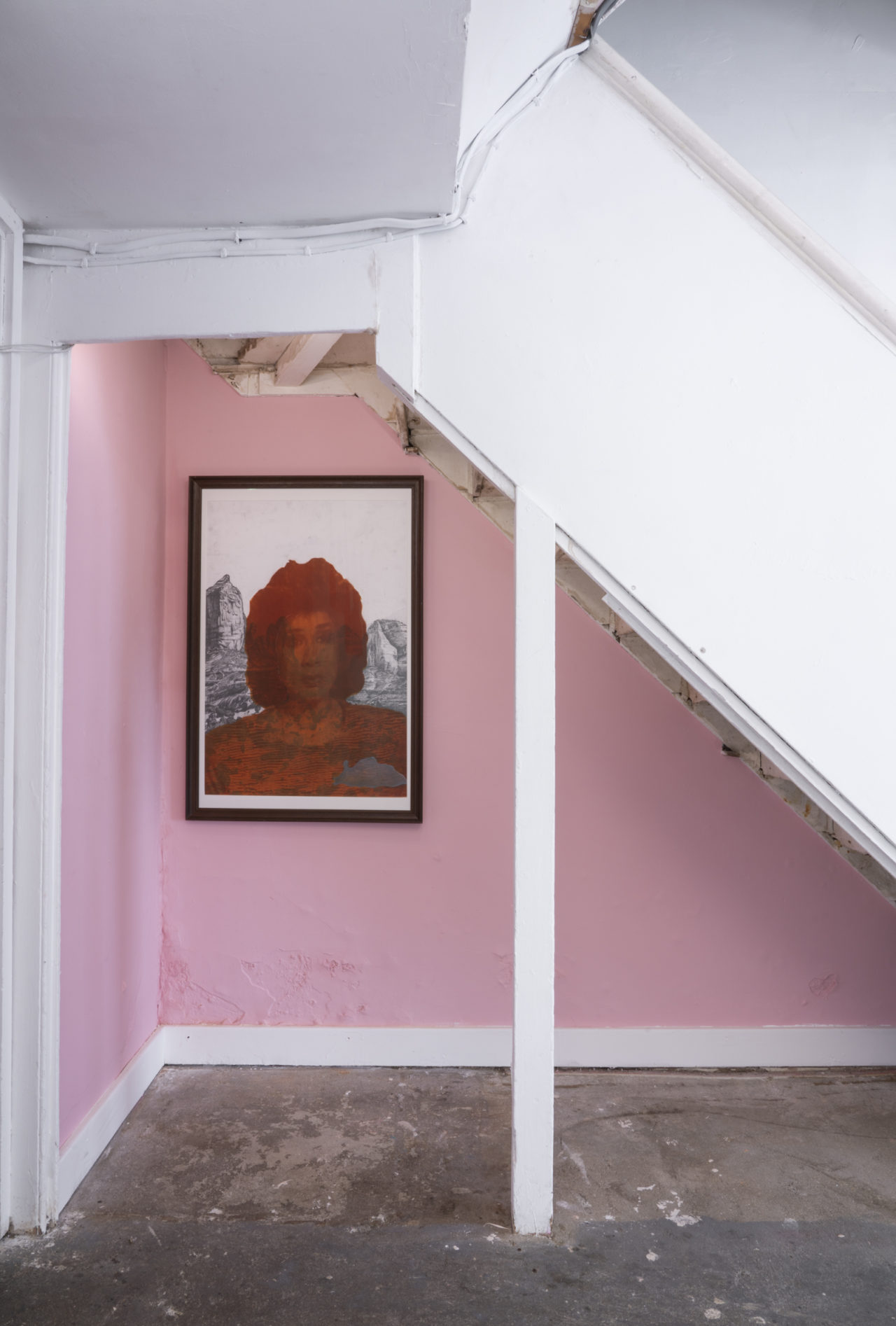 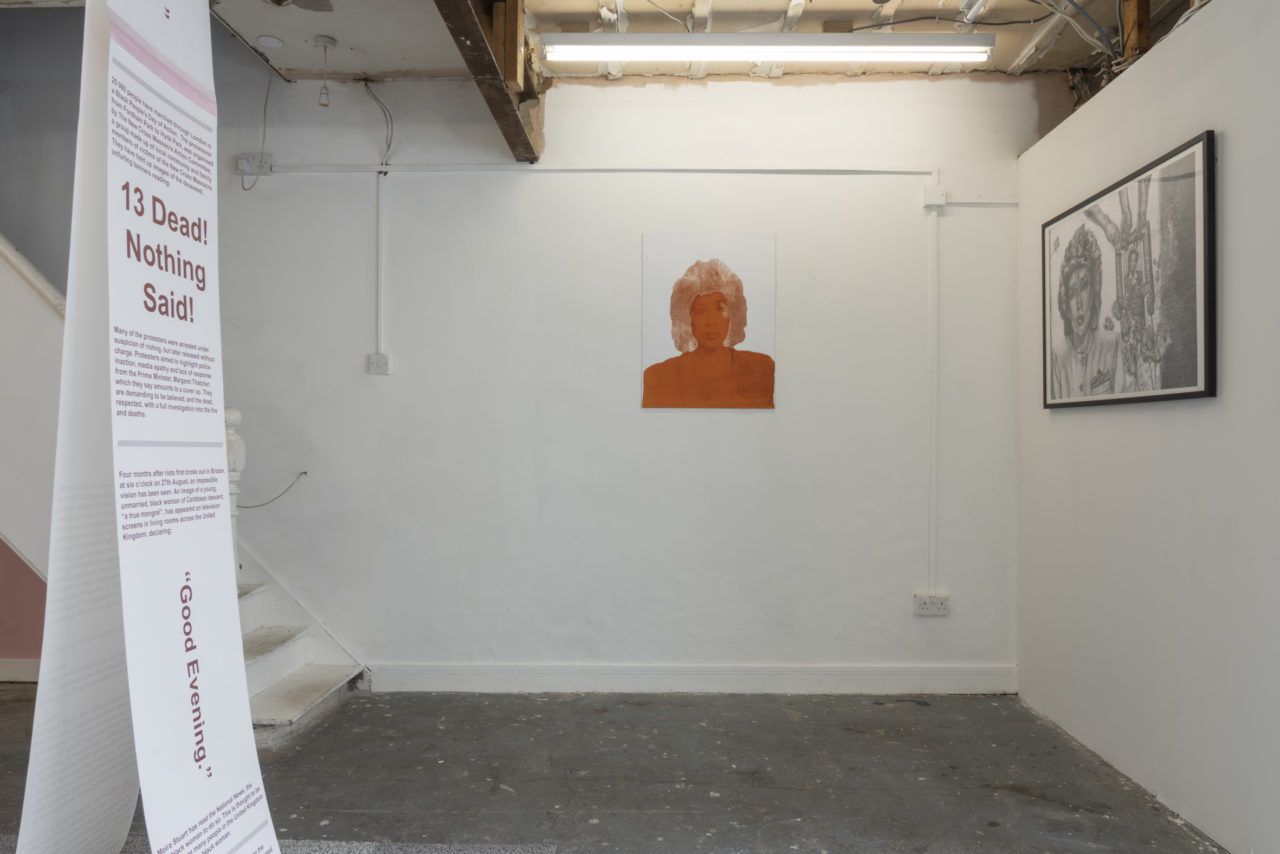 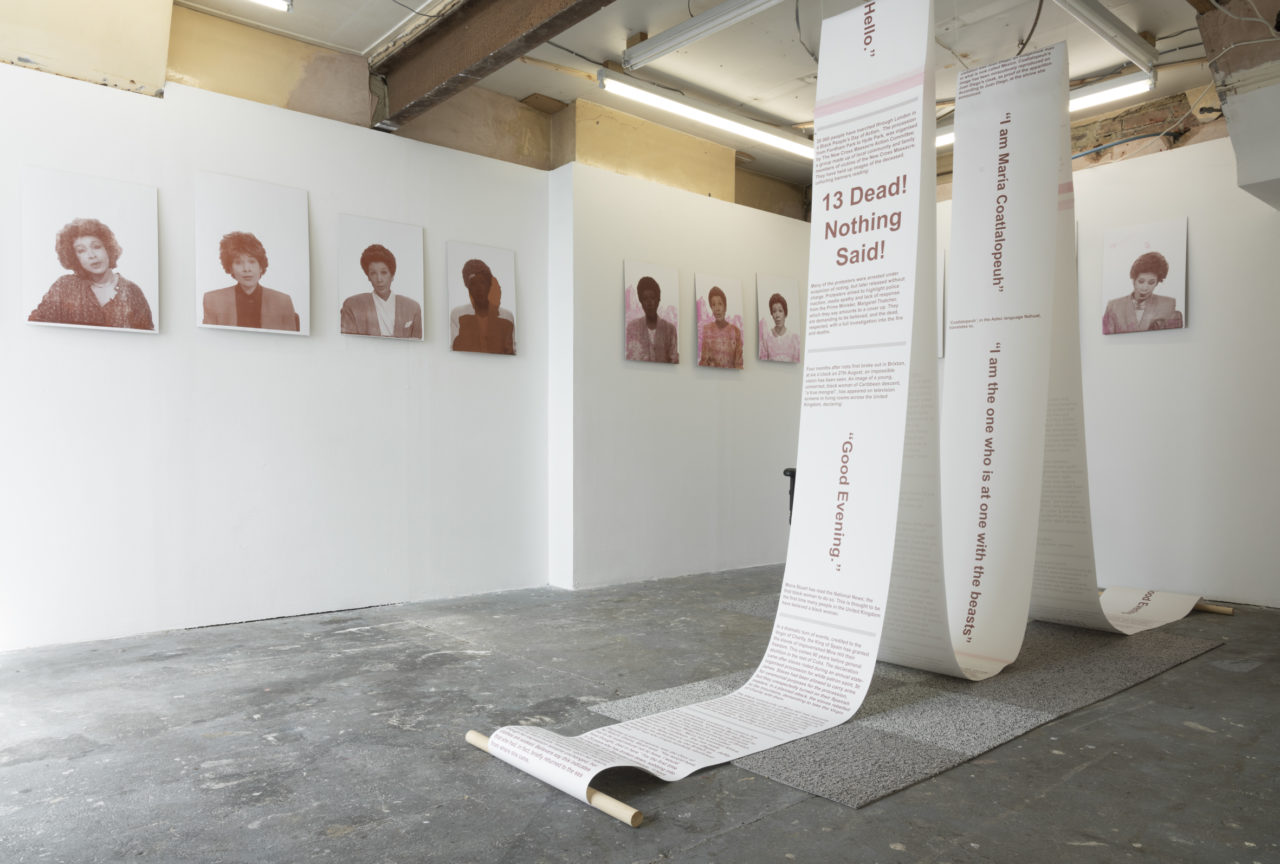 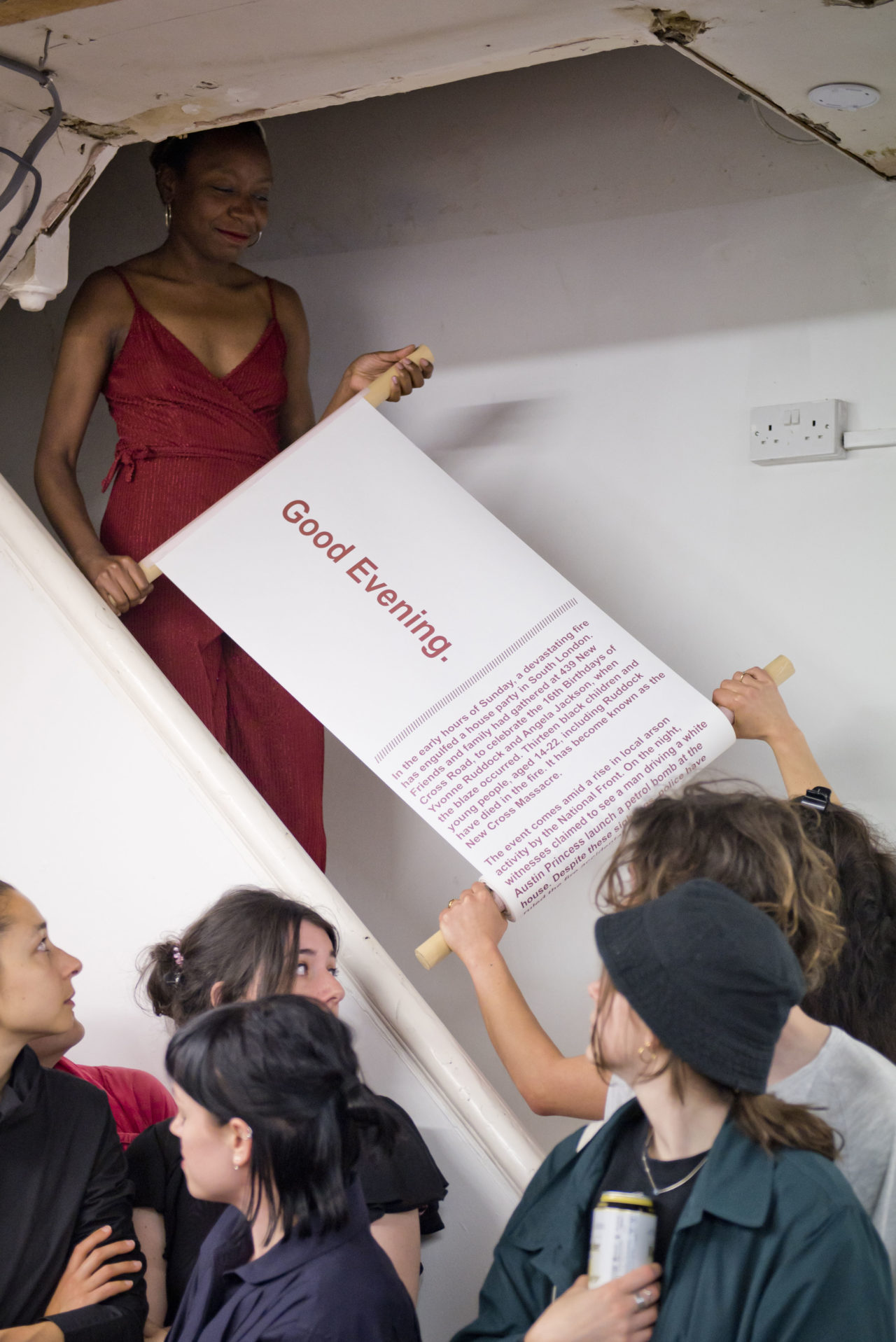 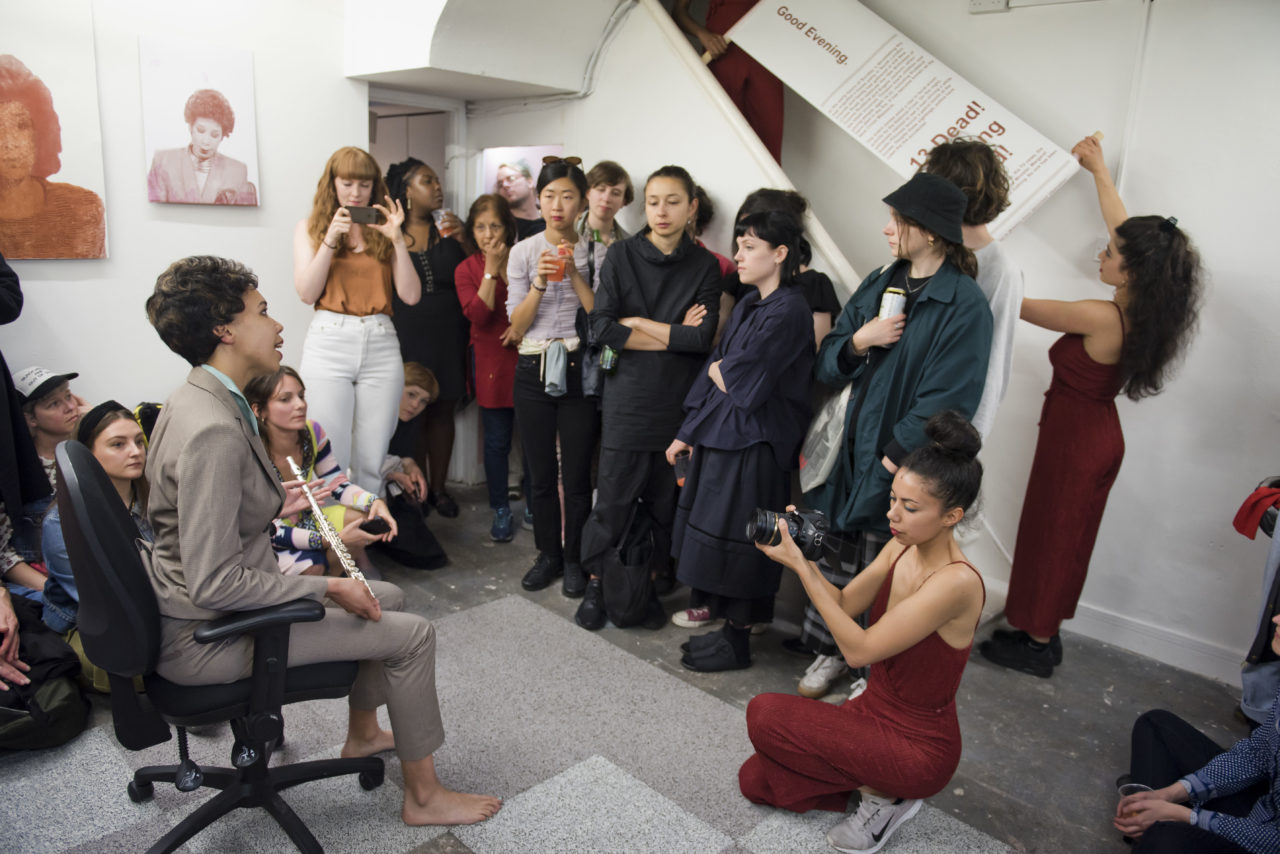 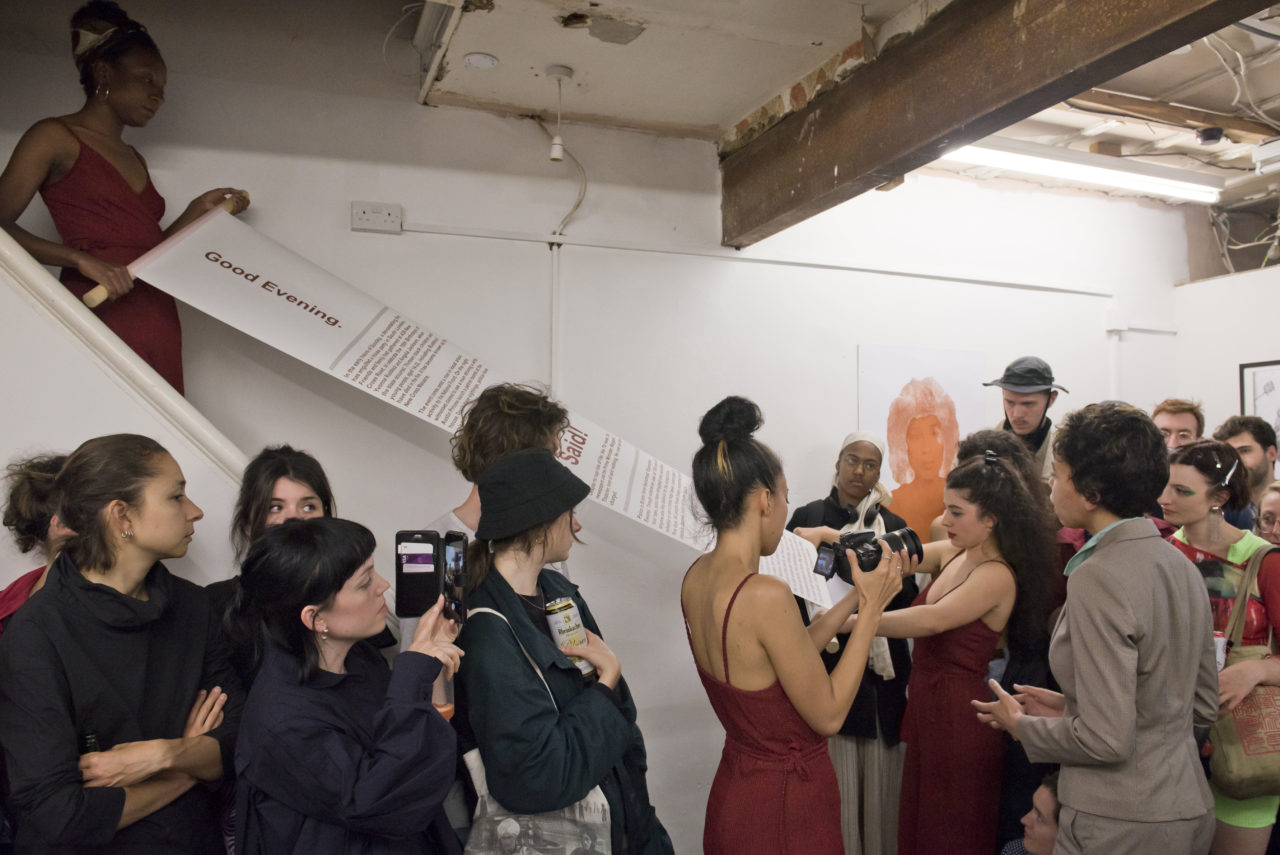 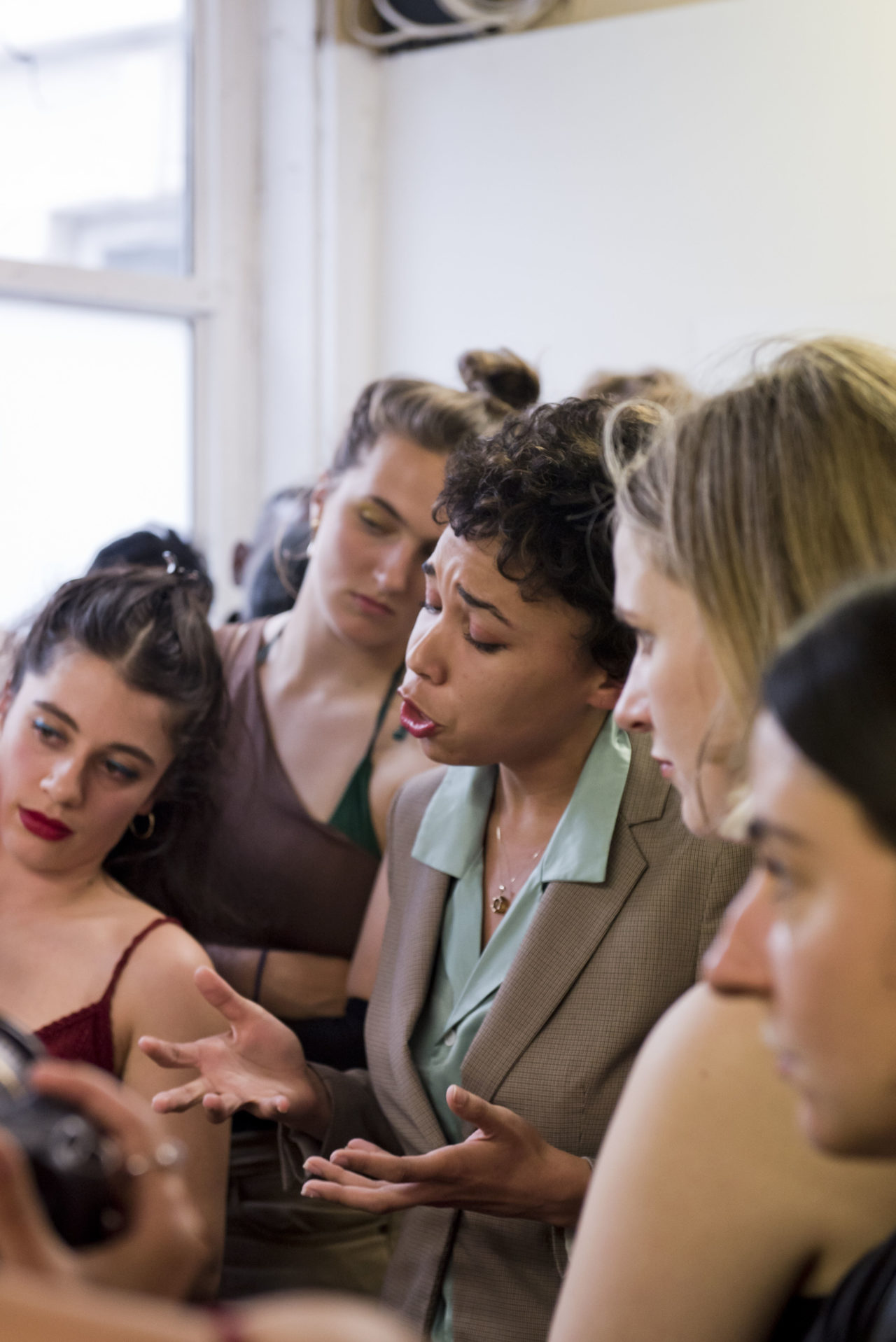 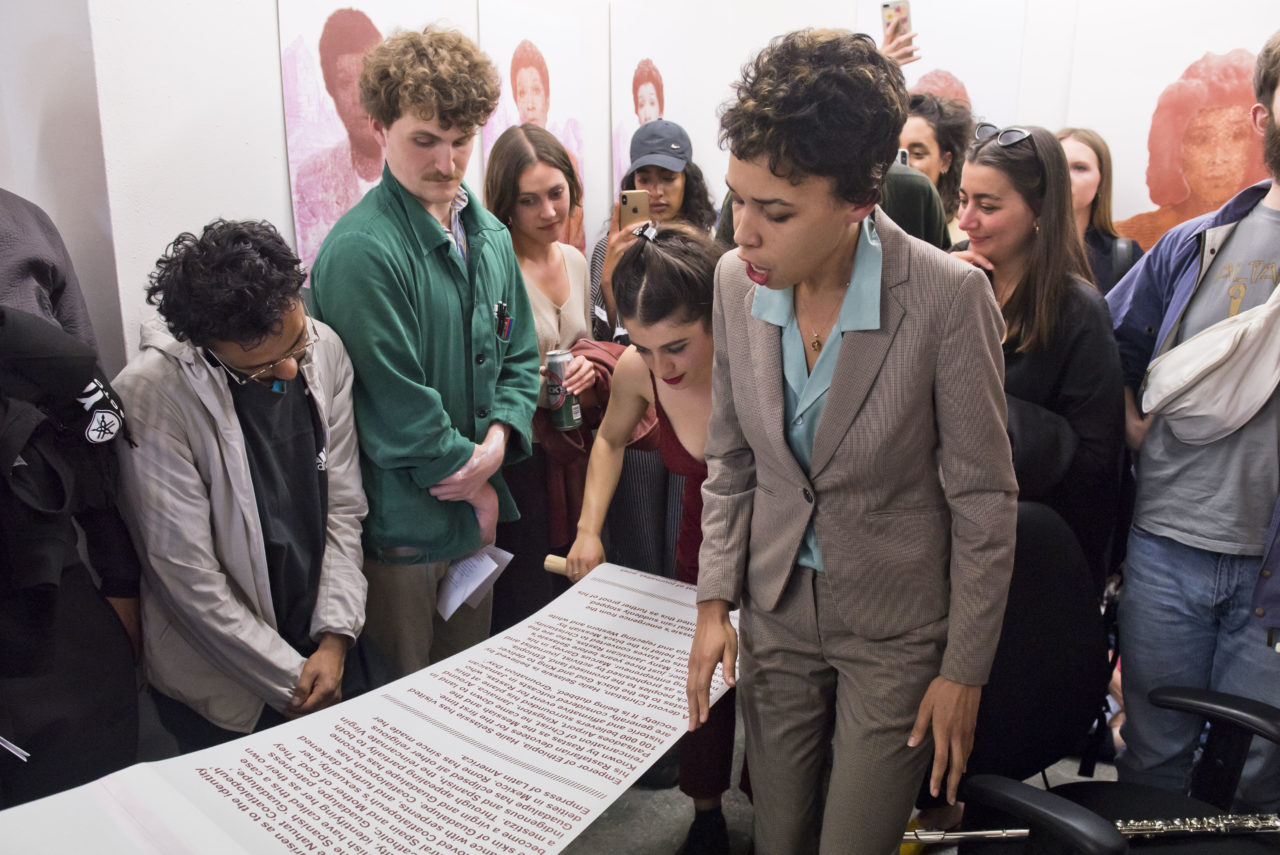 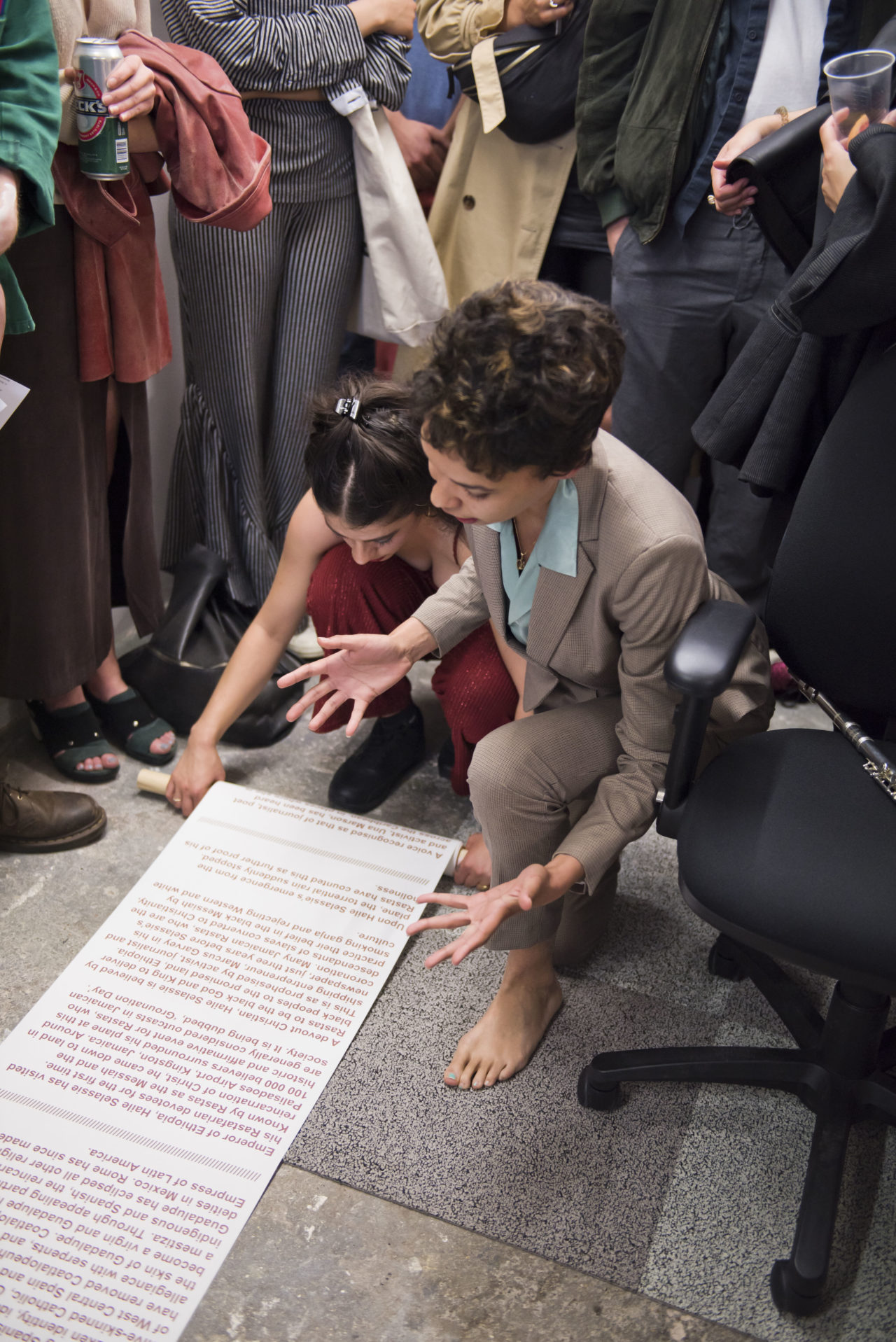 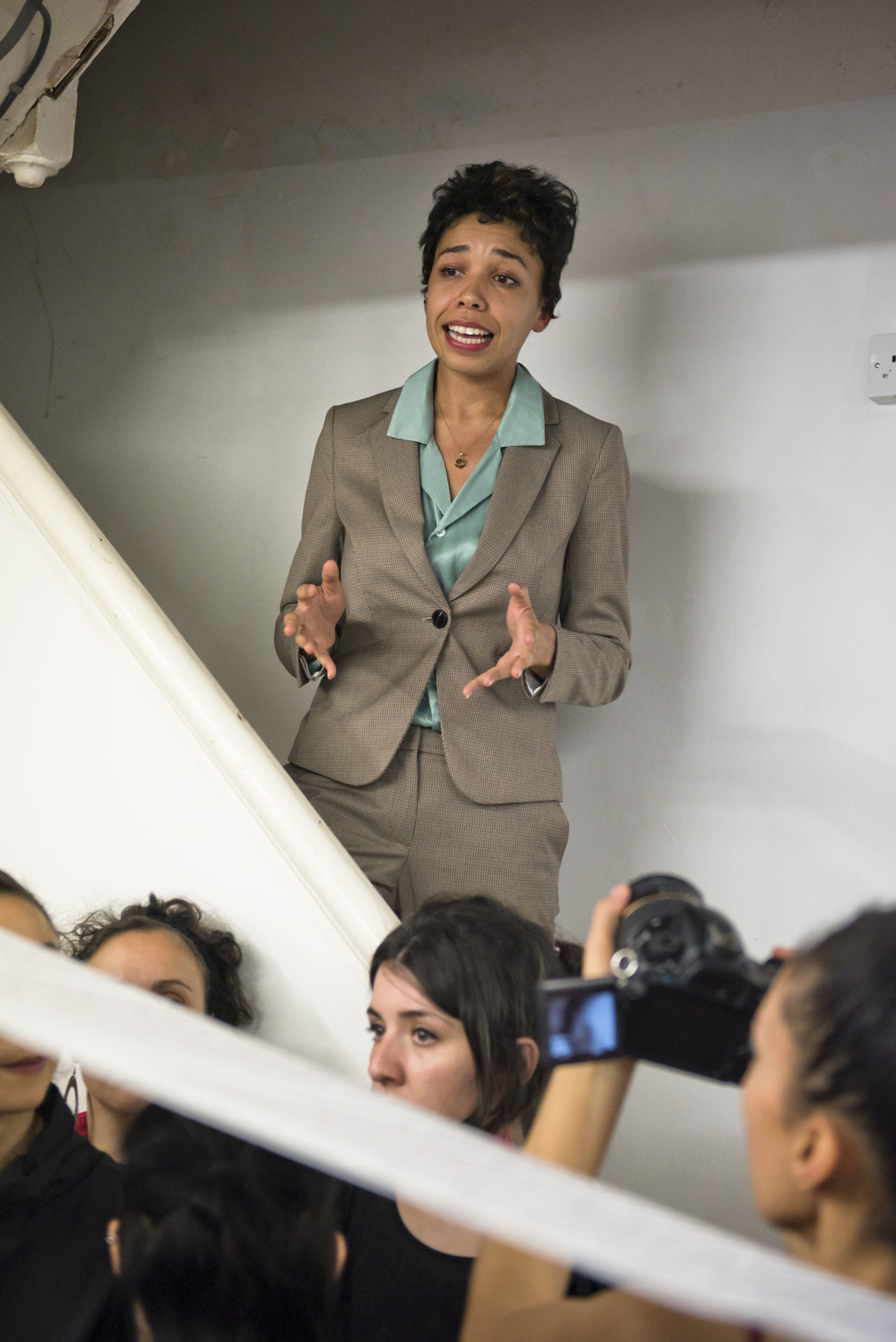 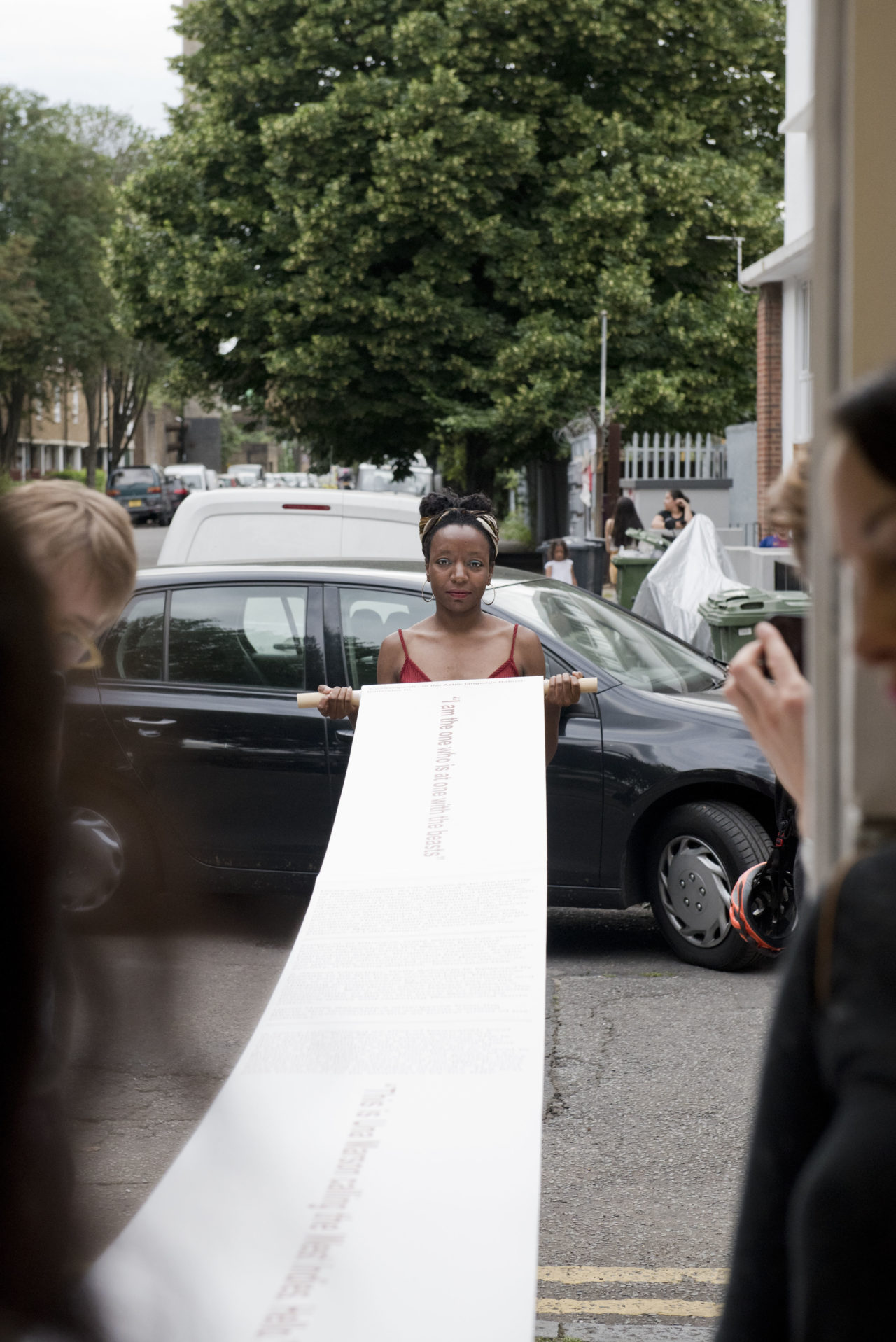 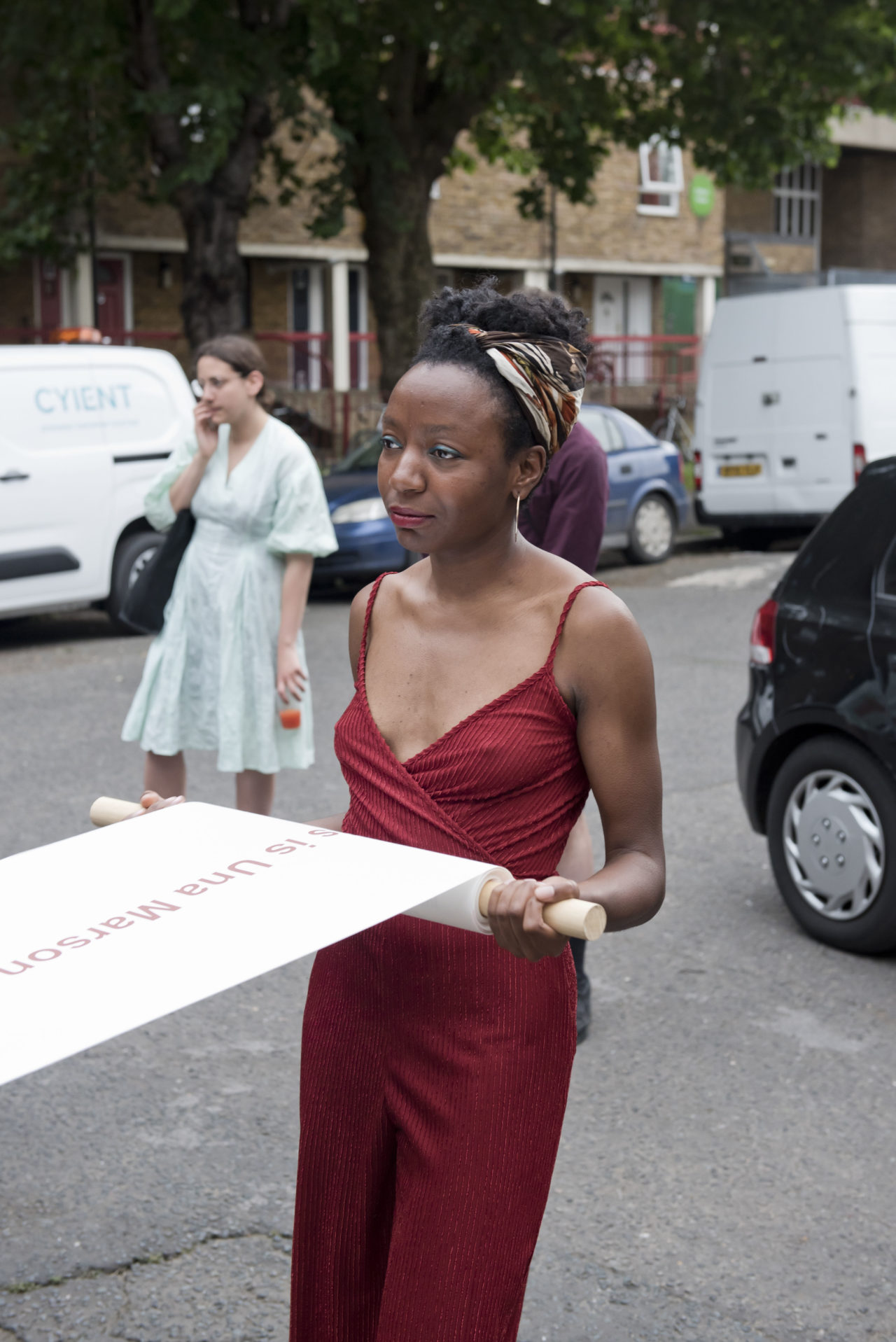 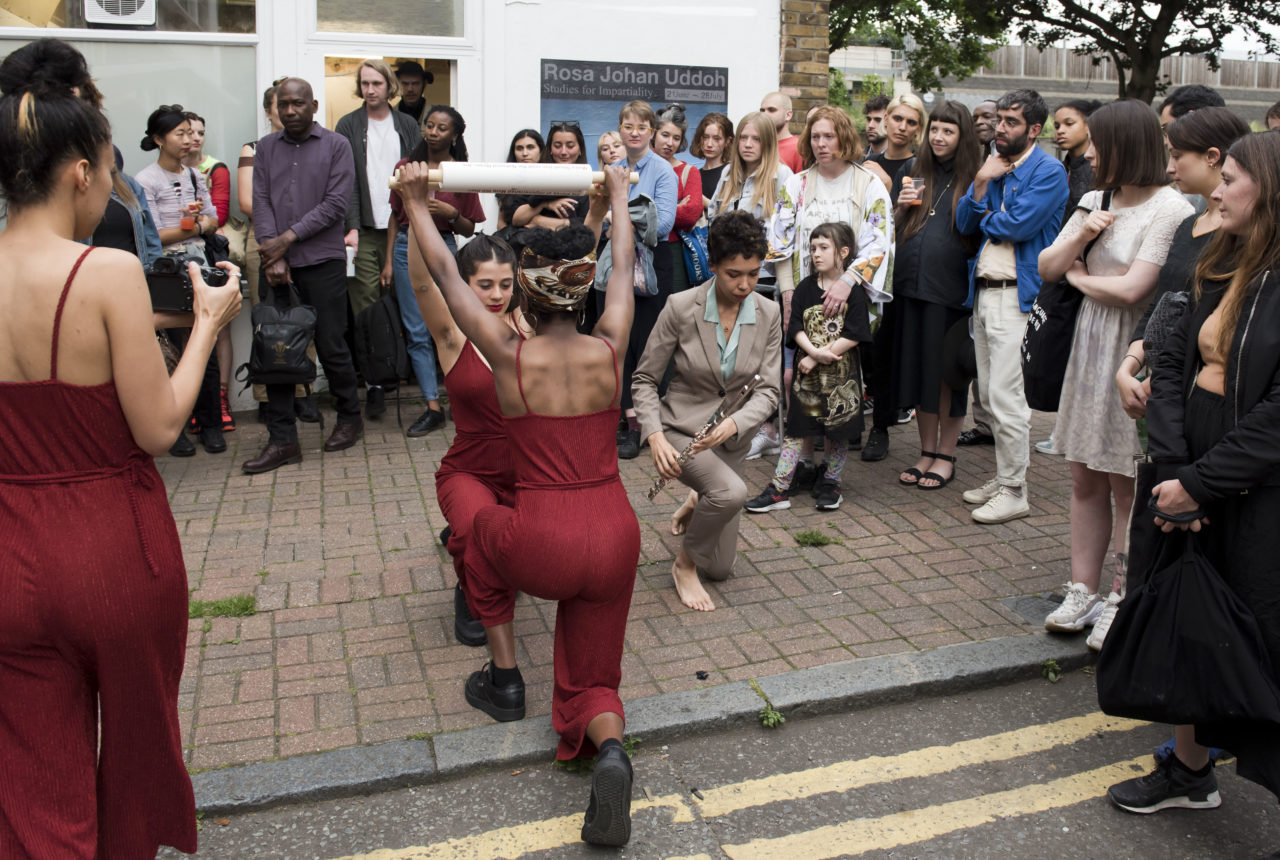 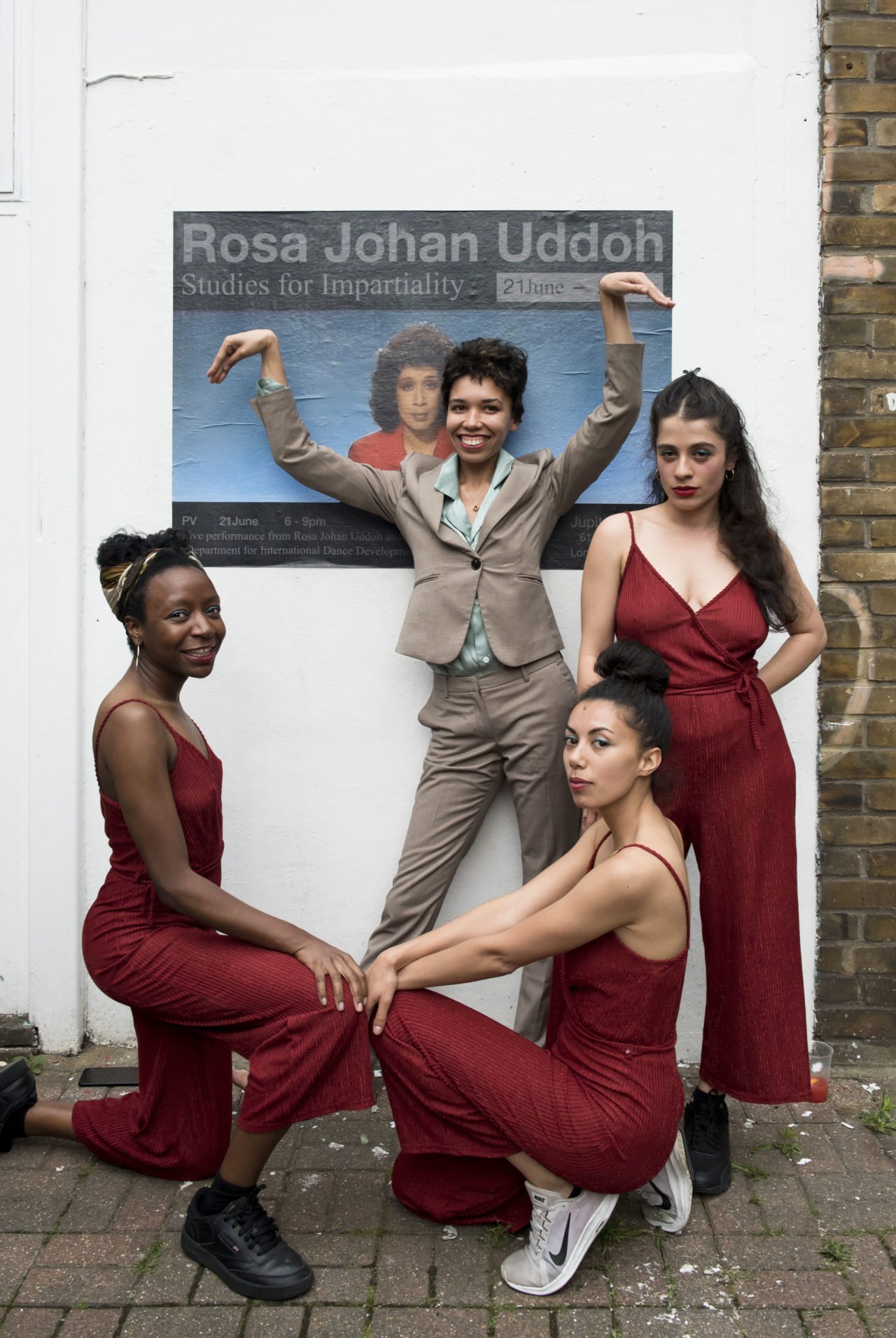 *Please note: Rosa Johan Uddoh's exhibition will be open to view from 4pm on Saturday 27th as part of the ticketed fundraising event, including a closing performance by Rosa DIDD (Department for International Dance Development) . We will be open on Sunday 28th, 12-6 (last day of the show)*

In Studies for Impartiality, Uddoh continues her exploration of radical self-love and black feminism, working through relationships with places, objects or characters in British popular culture. The exhibition stages multi-faceted imagery of Moira Stuart; the first black, female newsreader to appear on British television when she began working for BBC News in 1981. Through Stuart, Uddoh furthers her research into leading broadcasting figure Una Marson, a Jamaican feminist, activist and writer, and the first Black woman to be employed by the BBC during World War II.

Works on paper and screen printed reproductions of Stuart’s face taken from her performances on TV feature throughout the space, seeking to question how her representation informs the artist’s own identity. By repeatedly tracing her image, Uddoh references the ubiquitous nature of Stuart’s presence on television screens in British households throughout the 1980s, 90s and 00s, whilst recognising the limitations of her position as a supposedly impartial subject (both as a news broadcaster and as a woman of colour). Uddoh attempts to describe existing practices of believing black women, and the other-worldly conditions often necessary for this.

On the opening night, Uddoh will perform her script, written for a human teleprompter, ‘Auto Cutie’, with diasporic dance troop DIDD. Histories of miraculous brown Virginial apparitions and everyday tokenism are intertwined, delivered to the cadence of DIDD’s dance moves.

Through this project and beyond, Uddoh questions the consequences of representation, attempting to develop an understanding of performances of race and blackness in a global context, specifically their role in nation building. What role have black people had historically in the construction of national identities, from Una Marson to Meghan Markle to Moira Stuart?

Rosa Johan Uddoh (b.1993, Croydon) lives and works in London. She holds a BA in Architecture at Cambridge University. After working in architecture, she completed a Fine Art MA at The Slade (UCL) as a Sarabande Scholar. She is currently artist-in-residence at Sarabande, and the first Liverpool Biennial & John Moores University Fellow. Recently, she has exhibited at: Tate Britain, Black Tower Projects, New Contemporaries 2018, Bluecoat, and published writing in The Architectural Review.

For more information or to book an appointment please send us an email: info@jupiterwoods.com.