Matilde Cerruti Quara, "WE ARE HERE! IT'S ONLY THE BEGINNING. We do our thing because we believe it." 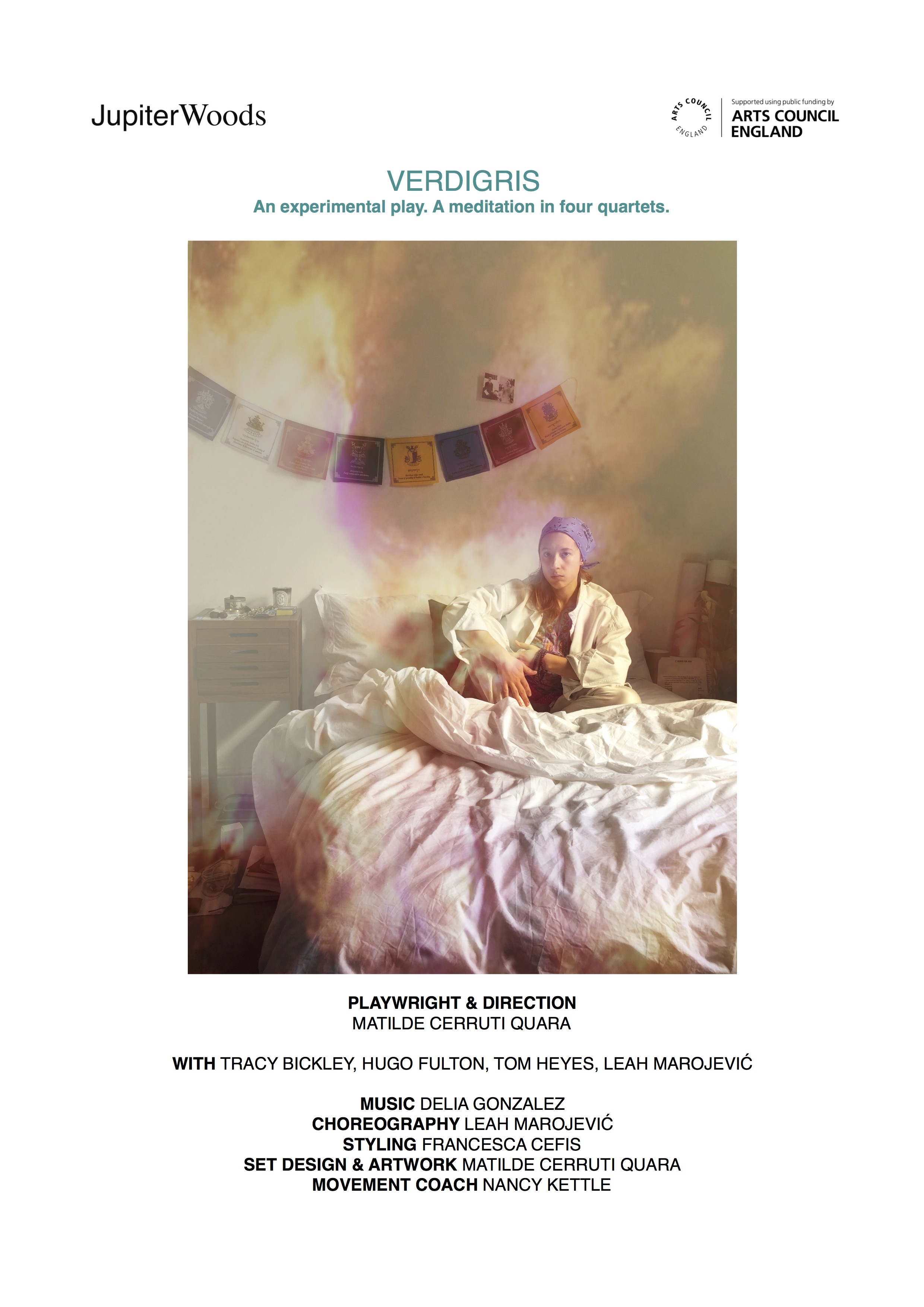 Jupiter Woods is pleased to announce Matilde Cerruti Quara’s first UK solo exhibition WHEN THE GATES COME DOWN, SWEETIE, IT WILL ALL HAPPEN VERY FAST: a two-weeks long living installation opening on 7 February 2020 with the premiere of VERDIGRIS, Cerruti Quara’s first play—a piece of experimental theatre which will use the artist’s installation as an open stage. VERDIGRIS is choreographed by Leah Marojević with music by Delia Gonzalez and styling by Francesca Cefis. Cast features Tracy Bickley (The Oracle of Time Future), Hugo Fulton (The Oracle of Time Past), Tom Heyes (The Unconscious) and Leah Marojević (The Conscious Mind) in the roles of archetypal abstract ideas. Special thanks to Nancy Kettle (Movement Coach) and Katherine Heath (Accent Coach).

If you've seen an old rusty penny, you've seen verdigris in nature; it's the greenish-blue patina that forms on copper, bronze or brass when exposed to moisture. Unstable, reactive and even toxic. Penetrating, toxungenous, inescapable. Yet a fragile beauty. An alchemical process, metaphorical of a state of natural yet artificial transformation. The structure of the script is inspired to T.S. Eliot’s Four Quartets and will embed four waltzing flows of consciousness, inhabiting the mystical universal space of the mind. Cerruti Quara’s interest in embedding elements from the radical theatre into her work originated upon discovering the diaries of Judith Malina who in 1947, together with Julian Beck, founded the experimental company The Living Theatre in New York City.

I open my eyes and find myself in the fullest void. It is both chasm and bliss; chaos and catharsis; an abyss of potential. For an instant (a very singular moment in time), it feels as if I could stretch my limbs as further as the infinite and take a leap of blind faith, plunging for good into an endless, beautiful cosmic pool of universal consciousness. This is a spring I’m thirsty to tap in, drawing the magic waters of knowledge.

I see this as a space of the mind reflecting all tautologies of lived life. A metaphysical mirror room, where nothing is returned exactly as it seems. All borders finally disrupted. Nature speaking throughout itself. The Future. The eternal loop. Democracy. A signal throughout the flames. There is no way out and no way in. The audience cannot be contained, but used to become part of the work, that yes. The yin blurs with the yang, and vice versa. I envision a bed that becomes a stage within the stage. An archetypical cradle. For in bed we are born and in bed we die, and in bed we sleep, and in bed we take refuge from both day and night, and in bed we make love and in bed we cry and laugh, and in bed we think. All in all, beds are a very equalitarian venue for subjective entities to gather.

Lights shift. I hear voices. Sound traveling in the atmosphere. And words. A language of the soul, spoken and engraved. 4 quartets X 4 characters. They speak. They breathe, they move, they dance. They are alive. They are four flows of consciousness. Fluent, along their horizontal line of introspective specularity. Contemplative. Oracles perched on the vertical ladder of time. Hope, wisdom and expectations. A gaze into the unconscious and towards the future. Thus spoke the wandering storyteller—“There is a crack in everything, that’s how the light gets in.” 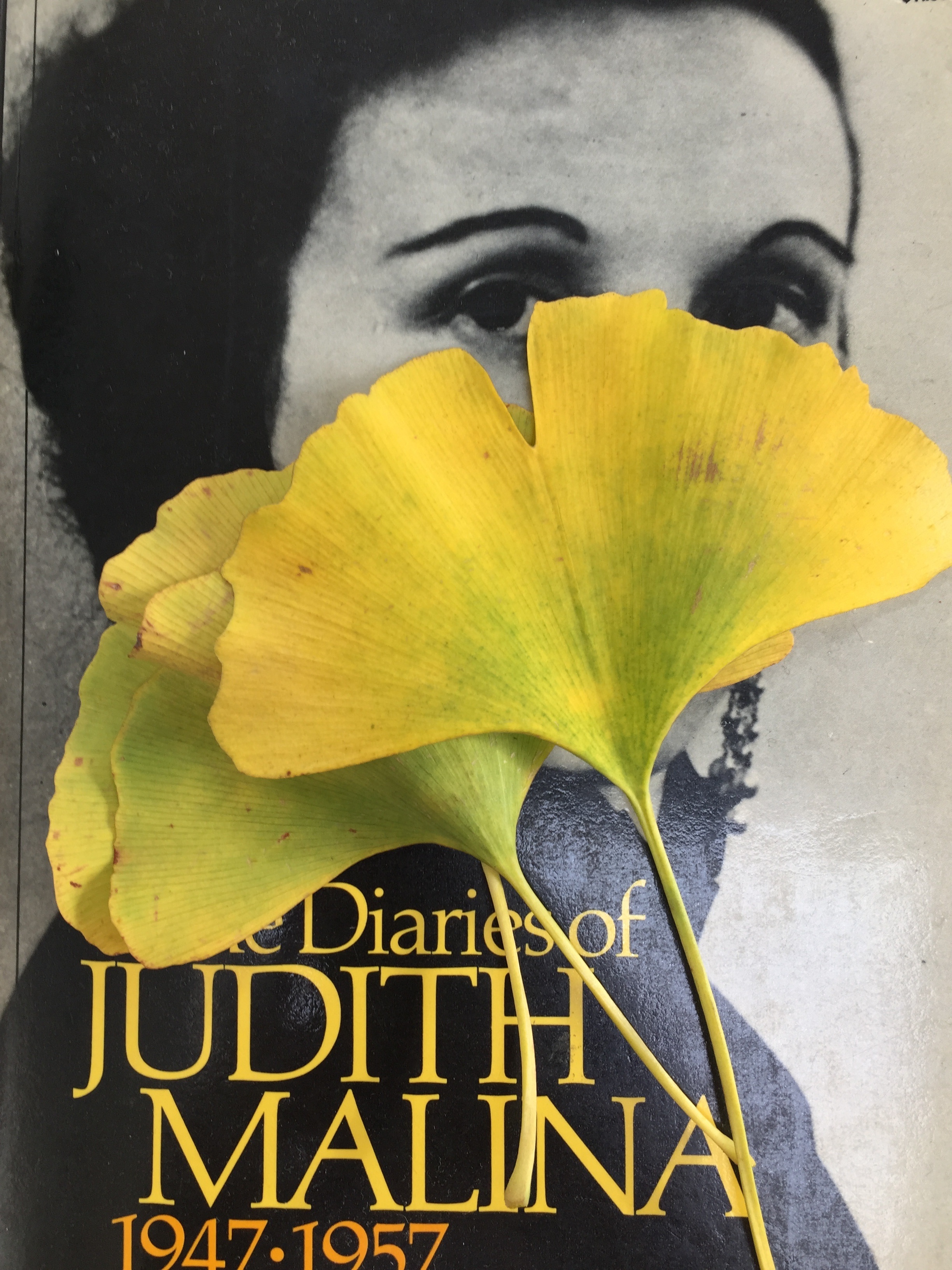 A mindful beginning shall lead us towards a concrete end. Hence I'm commencing our exchange with the solemn words of Judith Malina aged 21—

A journal kept for someone else is a letter and not ein Tagebuch.

May this silent dialogue be filled with purpose.

The alchemy has begun. VERDIGRIS is coming soon. Very soon.

This project and its process have been feeling to me as if a rocket shuttle was shuffled and thrown in the air and back into my bowels. Drizzling sparks from a start of startling intentions. Embracing all odds and shambles. Often bowing to The Universe. Opening up for a mystical way into the wilderness. Seeking the dusk that ever implies its own continuation. Suddenly hearing the explosion of a shooting star.

Most importantly our interim company is alive. The work is not mine any longer! So it kept faith to its name and became contagious.

Can you count all the times the tautologies of life have been manifesting themselves?

A play
Of RADICAL ACTION

I have envisioned a candlelit finale.

"There was certainly a revolutionary spirit that felt that it was really possible to change the world. And to change it not in some future date, as we still hope to do today, but immediately.

In fact we wanted to do it as we left the theatre! It was that immediate.

And when Julian Beck cried out that "THEATRE IS IN THE STREET!" we went out to make the revolution."

"I think we've been able to travel from country to country and as it work bring news, bring an atmosphere with us bring, bring with us what we've learnt, put what we've learnt into our work and form a kind of connecting link for us, groups of other people, from whom we learn things and to whom we give things, on whom we have an influence and who have an influence on us."

We have to call each other "Mr. So and So" and smile even when we don't like each other, because otherwise we would slap each other down.

By trying to get rid of the barbarism we cut off feeling and armoured ourselves against feeling and have become cold and therefore unnatural creatures.

It was a large arc of experience for those of us who went throughout it, that began when we opened it, that began when we started to rehearse it, until the last performance. And some of the performances were riotous and incredible and many of the performances were up to a certain point frustrating though in the end I must say I fee we always won the day. I saw the optimistc side of it but we, we opened up something. . .